The Stone Roses, Spike Island, May 27, 1990 has cemented itself as part of indie folklore. The gathering of the clans gig at Spike Island was a musical event that very few bands have ever come close to matching. It had been hyped up for months before, endlessly emphasised that this was the defining moment of a generation. When two forces collide. When rock meets rave. The point at which the world of music was going to explode into a unison group. The gig will always be remembered as a pivotal moment in British pop culture, when ‘Madchester’ exploded into the open and one of the best British bands to be conceived had their moment in the sun.

As soon as the Stone Roses’ 1990 bank holiday show was initially announced, everyone agreed that it already sounded legendary and extraterrestrial. In reality, Spike Island was an isolated field near Widnes, edged by stocky trees, dull pylons and a lurid green creek. It was also within spitting distance of the ICI chemical works. Famously, the wind from the river Mersey blew the sound in every direction bar the audiences, alcoholic supplies dwindled almost immediately and over-zealous security made sneaking in sound like an epic adventure. 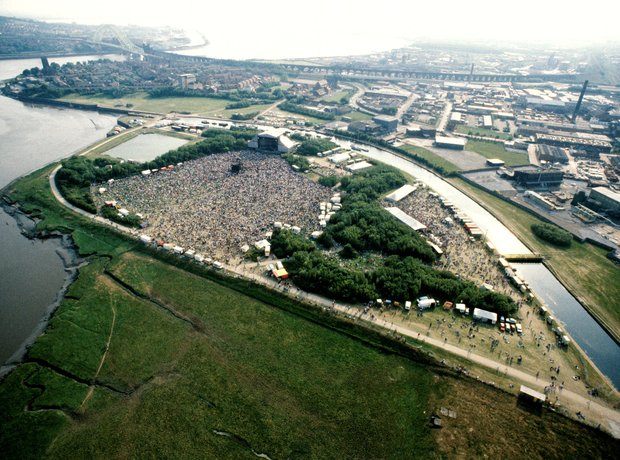 For a band that once professed their aspiration to play a gig on the moon, a reclaimed toxic-waste dump seemed an unlikely staging post for a gig of that magnitude, but that was always part of Spike Island’s appeal. The Stone Roses could have had their pick of notorious venues around Britain, such was their popularity at the dawn of the ’90s, even Knebworth, where Pink Floyd, Led Zeppelin and The Rolling Stones had played before them, wouldn’t have been out of the question.

Around 28,000 people (mostly teenagers) arrived at Spike Island and watched 10 hours of warm-up acts. Brooklyn’s Musto and Bones were barely known DJs, then or now. However, the crowd still had to endure more acts that were so uninteresting that they’ve automatically been  erased them from the event it seems. Surely the Roses could have had their pick of bands or DJs? Bands such as the Inspiral Carpets? Happy Mondays? With the sun slowly dropping behind the chemical plant, the air turned decidedly chilly, and the Stone Roses came on appeared into red strobing. They played the same set that was seen in Stockholm. Only this time around, the sound was bass-light, not helped by an northern-western breeze that rendered Ian Brown’s vocals almost inaudible to the audience.

The Stone Roses themselves made almost no money from the event, but they made something more elusive and sought after: history. In the years since, outdoor shows on that scale became commonplace. Think back to Oasis at Knebworth, Blur at Hyde Park, even the Roses themselves at Heaton Park back in 2012. However, none seem so large in the collective consciousness as Spike Island. It was a moment in time; the beginning of a hot summer that saw England nearly go all the way in the World Cup, the highpoint of a period when Manchester and the north-west felt like the centre of the universe.