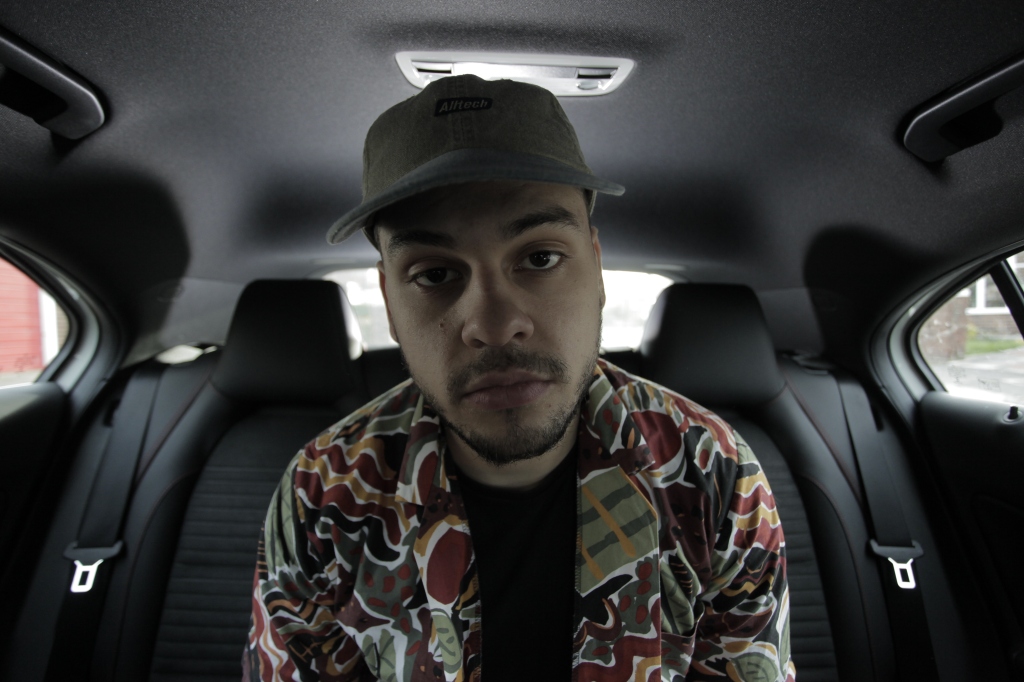 A fresh face and a fresh sound on the North East hip-hop scene, J Smirk has a lot to prove. Breaking on to the scene almost a year ago, J’s music has been divisive, drawing criticism from hip hop traditionalists due to it’s voice enhanced trap sound.

A sound that isn’t familiar around these parts, Smirk without a doubt starts on the back foot when it comes to fighting for acceptance locally.

But with ambitions beyond Newcastle, we met with J to find out more about the promising up start and what he’s got to bring to the table.

Ride Music: Tell us a bit about yourself, how did you get into music?

J Smirk: I got into music through my mum for sure, both my mum and dad are very musical people. My mum now DJ’s around Newcastle, she does cruise ships and stuff like that too. It was all like soul and RnB. My dad was always very into Northern Soul and Motown. So I was always fed music growing up and I think it was because of those genres that kind of pushed me to go towards rap and hip hop music.

Wu-Tang Clan was like the first rap music that I went out of my way to listen to…I think I downloaded their stuff on Limewire back when that was a thing. Eminem as well, D12 especially.

It was in high school where I remember we had this exercise in English, I’ve forgotten the name, but you’d have a word and you’d take every letter from the word and you’d have to create other sentences relating to that word from them. I used to do that all the time in school, I’d really enjoy doing it and ended up kind of developing that into writing then writing turned into structuring it into a rap. I always used to write raps about my different teachers in school and that was gonna be like my thing to show off to people.

RM: Who are your main musical influences?

JS: I’d say Eminem was like an early influence, as I got older I actually started listening to more singers, I think that was just because of the performance aspect. Michael Jackson is a massive influence of mine, and James Brown.

In terms of going into rap, Ice Cube is a massive influence. It’s weird like I’ve always had influences but as I’ve gotten older I haven’t went off those influences, but I kinda get inspired by new people along the way, so I never really stick with the same people in terms of like my musical influences and how I make music. As I got older it would become people like Kid Cudi, Kanye West, Chance the Rapper and Childish Gambino.

For me, I perceive rap as this person that is like a twisted version of me and who I am. It’s like this guy who can say things that I can’t usually say, like an alias to me. So when it comes to performing, that’s why I really respect people like Michael Jackson or James Brown, Gambino, even people like Chris Brown, they have this persona when they come on stage, and they really put on a show with it. And that’s everything from how they hold themselves when they go in to meet people and stuff like that. It’s kind of like a working business and everything about you has to contribute to that.

RM: You dabble in a bit of acting as well as music, so when did you decide you were going to pursue a career in music?

JS: Funnily enough it was because of Kema Kay that I decided I was going to take music seriously. We were working on a TV show together, Beowolf on ITV…which didn’t last very long but it came around and we were filming in County Durham. I met Kema on the day. I had never met him before but I had always listened to him, so it was a really weird story.

When I was coming out of the trailer and I was listening to ‘Everything’s Alright’ by Kema, I saw this guy getting into a car to leave the set, and I was so certain it was him so I just sort of went up and started a conversation. It was nice, a bit weird because we were both from Newcastle and a lot of the other people were from down south.

Then I saw him a couple of days after on the same set and I was like “I’ve got some stuff, I make music on the side.” And I sat and played him my stuff, he gave me a few pointers but I think I just needed that person to say “you’ve got something about you that would work, just go for it.”

I was always really self critical of my music because, and I blame acting for this, you become a chronic overthinker. You do become very insecure about your craft and what you do because like music, acting is just constant rejection really… you’re going to get a lot more nos than yeses and it’s just so competitive. So when it came to my music, knowing from Kema Kay, that I respect a lot in the scene musically and as a friend, just for him to say “look, you’re good” made me feel like I can totally do this and go forward with it.

He’s going to love that…I’ve never really told him he’s the one that pushed me to take music seriously.

RM: What is the goal for J Smirk, where do you see yourself going in the world of music?

JS: It’s a funny one, because where I want to go musically, I personally can’t see it as stadium and arena sort of stuff unfortunately. As much as that is the dream, to play a sold out show and have fans that appreciate your music that don’t know who you are. I’d like to be a relevant artist, like outside of the sphere of the North East…I kinda want that now.  As much as I do love the scene, and I do take pride in being a part of it, I’ve always thought past that. Every time I’ve been making a track I’ve never thought like ‘I’m going to do this to impress the scene’ or even to impress anyone, there’s a whole other world outside of the music scene in Newcastle. 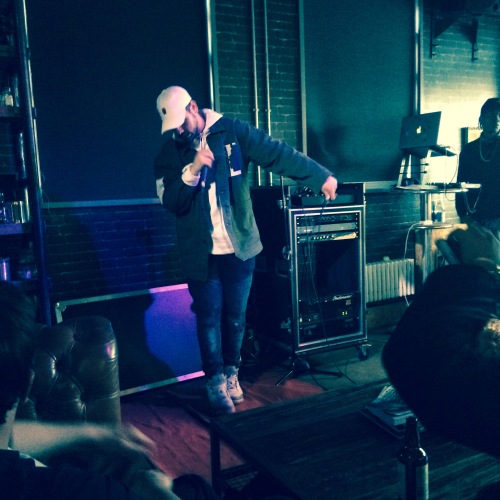 RM: Who at the moment is your favourite artist out of the North East?

JS: I’ve got a bunch that I’ve been listening to recently, hip-hop and otherwise. I definitely couldn’t pick a favourite but I listen to a lot, Kema Kay and Kay Greyson are the easiest choices, that’s my brother and sister. When they release something I’m always one of the first to listen to it.

I love SoShe, I think SoShe are amazing. Reali-T, I think Reali-T is crazy. In terms of people within the scene, Reali-T, 90Bro, I really like 90Bro. Sam Fender, he’s not a hip-hop artist, he’s a singer-song writer, but hes got something. He had so much talent within the scene and he broke out of it, he went a way for a bit then came back, he’s got a single called ‘Play God’, which has been selected for a spotify playlist, he’s just killing it. He’s North East based, he’s awesome.

I think it’s all about support really, if you think about it in terms of ‘breaking out of the scene’ or whatever, all we really have is each other, it’s just nice to support it.

RM: Do you think ‘Geordie rapping’ is limited as to where it can go?

JS: In my opinion I just feel like it’s very closed off, the Geordie scene, and I don’t feel like it has to be. A ‘Geordie rapper’, taking that as a term, is someone who is Geordie and they rap Geordie. I personally don’t listen to Geordie Rap, but I sure as hell promote it and constantly share it.

I’m open to listen to it, it doesn’t have to be my thing but I’ll always have a place for it. It’s nice to see people from our area doing that, not to like shoot myself in the foot but I’ve never kind of seen myself in that category. I think it’s a shame that it has to be so restricted, well put it this way, the only people that have had something to say about my music that hasn’t been constructive has been Geordie Rappers.

I honestly feel like people are threatened by something that’s different as well, Geordie rap would like to be seen as being discovered from Newcastle for it being what it is and I just don’t see that happening at the moment.

Down the line for sure, it’s taken this long for Grime to be discovered by the mainstream, years, now people over in the US have taken to it. You’ve got Manchester grime, Liverpool grime, even Blackpool grime, and Newcastle in my opinion is a bit far down that line. You can still have a Geordie accent but I feel like don’t lack your originality, give yourself some credit, you could talk about something totally different as a pose to the same old.

JS: This year so far has been blessed for sure. Definitely a highlight was every track on the mixtape getting some radio play. I think that was amazing, it felt so good to have a project and have more than like 3 shows playing at least one track off the mixtape. Radio 1 Xtra play was a highlight for sure, that was fucking insane.

Having my first proper gig that was just me headlining at The Box Social was crazy. It’s the smallest venue, there was like 10 people but it was the most fun I’ve had. We had the place jumping, it was like a Sunday afternoon, it was so funny.

A highlight for sure. Before then Kema and Kay had just brought me up to do songs together but that was my first entire set alone.

I think just kind of hearing from other people in the scene that they like my stuff as well, I found that really satisfying. I think that’s been kinda crazy because like I said I watched all these people before hand, never in a million years thinking that I’d get to work with them. Then they’re asking me to do something, it’s just really surreal.

RM: Is there anyone you’re still looking to work with?

JS: Yeah, I’d love to work with Jamilah, for sure. I feel like we could make a banger. Reali-T, I’d love to do a track with Reali-T. 90 Bro. The usual man. I’d also like to get a cheeky little verse with SoShe but they’re popping right now so I don’t know if I could get them.

JS: Couple of projects coming up and just gigs, I’ve got plenty of gigs. I’m doing a project with Kay Greyson, I’m also doing a project with Kema. Me and Kay are looking to do an EP together, it’s a big EP, a massive project. All I can say is that it’s something new and totally different. It could fall on it’s face because of that, but I think us as artists will be artistically satisfied by this project because it’s just two hip-hop artists from the North East coming together, you would not expect something like this from that.

Find out more about J Smirk

Let us know what you think!