Pop music isn’t a genre known for being full of socially conscious lyricism, it’s music for you to have a good time to and forget your problems. But what if it could be both? Surya is an artist looking to make that happen.

Hailing from London and based in Durham, Surya is a musician unafraid to tackle difficult and sensitive topics with his RnB infused pop tracks.

Ride Music: Tell us a bit about yourself and how you got into making music.

Surya: I’ve been writing songs since I was about twelve, I wrote my first song and it was pretty bad looking back at it, it was like some random motivational thing about not giving up or whatever.

I was really into RnB and hip-hop, The Real Slim Shady was actually the first song I heard hip-hop wise and from there on I tried to increase my consumption of music. Michael Jackson was the beginning, I’d dance to him, he was everything. Then I listened to Usher, then Justin Timberlake in conjunction with other hip-hop artists, it was just like ‘yo this is crazy.’ Especially Justin Timberlake, when I first heard Like I Love You, I was like ‘this guy is fusing the RnB elements that I like with the hip-hop elements that I like in one compact parcel.’

When I got older I started to listen to a bit more hip-hop, I started diving into more 90’s hip-hop. I’ve always been interested in socially charged stuff. I was into politics and the way the society is shaped so rap music from the likes of a Tribe Called Quest was perfect because Tribe actually influenced the likes of Pharrell. So Tribe’s stuff musically was very appealing to my ears. Their lyrics were outstanding, especially the subjects they use to address, things like date rape and alcoholism, they use to touch on the killing sprees in the ghettos, the entire Low End Theory album was a standout classic for me. 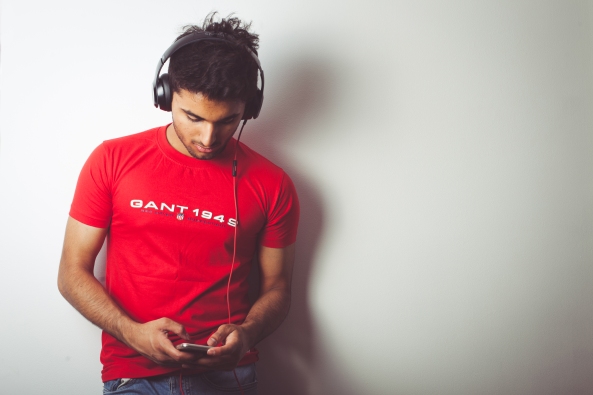 So this was my ear and whilst I was listening to this stuff I would write. Normally on the bus. I use to write poems and music and the love for poetry just sort of infused with the love of music.

I used to use garage band on my phone on the way home, then before I came to university my friend ripped a version of Logic and gave it to me. He was a legend, I remember we were sat in his dorm room, we were both making songs. So once I got Logic, during freshers about a year ago I was just like ‘yo this is crazy’ and I just sat there making beats, making beats, making beats, 24/7.

Then I got around to making the song Move It, that’s my debut single. Then from that an entire concept emerged revolving around the single. So I’m in the process of making an EP that consists roughly of 8-9 songs. it’s gonna be called Adolessence.

RM: Your song Move It tackles the sensitive subject of sexual harassment, are the issues raised in your music things you feel strongly about or things you’ve had personal experiences with?

S: A bit of both…I of course haven’t sexually harassed anyone or been sexually harassed for that matter but I do think it’s an issue that has to be addressed and I do see cases of sexual harassment when I go out to places like clubs.

So every song on the album I’m currently working on tackles a different issue. So that was sexual harassment but for example there’s another song that deals with things like self-hatred and attrition. Then there’s another one talking about protecting your dreams and no matter what the society around you does, you should protect your own aspirations and work on them, then materialise what you see in your mind.

RM: Do you feel pop music needs to conscious-up a little bit over all?

S: I feel like if music doesn’t have meaning then it defeats the purpose of having that platform, although I don’t think all music needs to be socially conscious. Songs can be about love or having a good time and stuff but there has to be a balance between the conscious stuff and the good time stuff.

My mission statement is to make accessible music. Because that’s the other part of the balance, you might have important messages but it still has to sound pleasing to the ears. Because if not then you might as well just become a social activist, spoken word poet or a politician. So, it’s about infusing consciousness into pop music. Ideally if I had my way I would forge a bridge where I could present music that is revered for its conscious and social meaning but also its enjoyment factor.

RM: You’re a part of a creative collective called ‘Iris Iver’, tell us what that’s all about.

S: We are just young people, like you and me, who want to express themselves. Not necessarily through music, I mean I’m the only one that makes music in the collective. So it could be through photography or it could be through blog writing. It doesn’t even have to be anything to do with the arts.

If you think that you are good at something or you’re passionate about something, you should go and maximise your potential in that field.

Life doesn’t have to be restricted by your ‘real’ and your ambition, you can do both. That’s what Iris Iver is about.

S: The goal is to put out the Adolessence EP by the end of summer, hopefully people will like it.