Another month, another Obscene

Eyeconic, of Tees Grime Family, played host this month. Fresh off the release of his new album Skink Or Swim. The polish native did a stellar job of hosting, dawning his Poland football shirt proudly whilst jumping in and out of performances with fellow Tees Grime Family artists.

It’s hard to stress how surreal (and enjoyable) these Obscene: Open Mic events are; in the sense that it’s hard to believe a hip-hop scene this diverse exists in the North East of England. 16-year-olds that are as impressive as veterans, and veterans that are as impressive as anything else coming out of the UK right now. The one thing all of these artists have in common is their unrelenting hunger, a hunger to be heard and a hunger to be respected as artists. It’s certainly an exciting thing to witness.

It’s been widely reported that hip-hop is now the most popular genre worldwide, over taking rock. There’s no doubt the North East is home to many a hip-hop fan that has no idea that their local scene exists, let’s hope in time that can be changed.

As usual the quaint Arch 16 was packed out with artists and fans coming from the length and breadth of the North East. So, let’s get into it, the top five performers that stood out at this month’s Obscene: Open Mic.

The Middlesbrough collective, including host Eyeconic, brought their A game down to Obscene. Things got grimey, the TGF made their presence known with lightning fast flows that could keep up with London’s finest. YH (Yung Hydro) stood out amongst his peers, he brought with him undeniable lyrical ability that kept you hooked from start to finish.  There’s real star quality amongst this collective.

Davey Blast quite simply embodies what hip-hop is really all about. No thrills, no gimmicks, just straight bars. The veteran MC flexed his lyrical muscles with an on-point freestyle that truly set the bar for everyone that came after.

What were you doing with yourself at 16? 1 of 2 sixteen-year-olds to feature on this month’s top 5 list, Eum. is getting people talking. Arguably taking the hardest slot every month, the first artist on the mic, Eum. destroys anyone’s preconceptions of him as soon as he picks up that mic. It’s time for people to stand up and take notice of this young MC.

NATO is a guy that knows how to grab the attention of a crowd and keep them in the palm of his hand. Strutting around Arch 16 and spitting fire. NATO is genuinely one of the best doing it right now, he’s an innovator on the scene and bursting with raw talent.

The second 16-year-old to make it on this month’s list, he’s not called Big Fletch without reason. Towering above the majority of MC’s in attendance, literally and figuratively, Fletch spits with aggression and passion. Almost missing out on his spot due to turning up late, Fletch made the most of his opportunity, showing that age is but a number.

Let us know who you thought stood out on the night. Once again, Obscene wouldn’t be what it is without everyone who turned up and picked up the mic. Thank you. 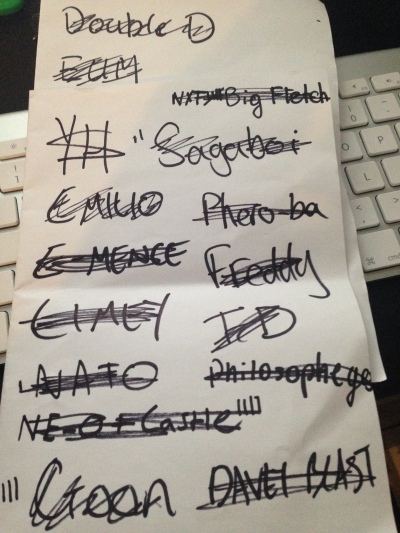