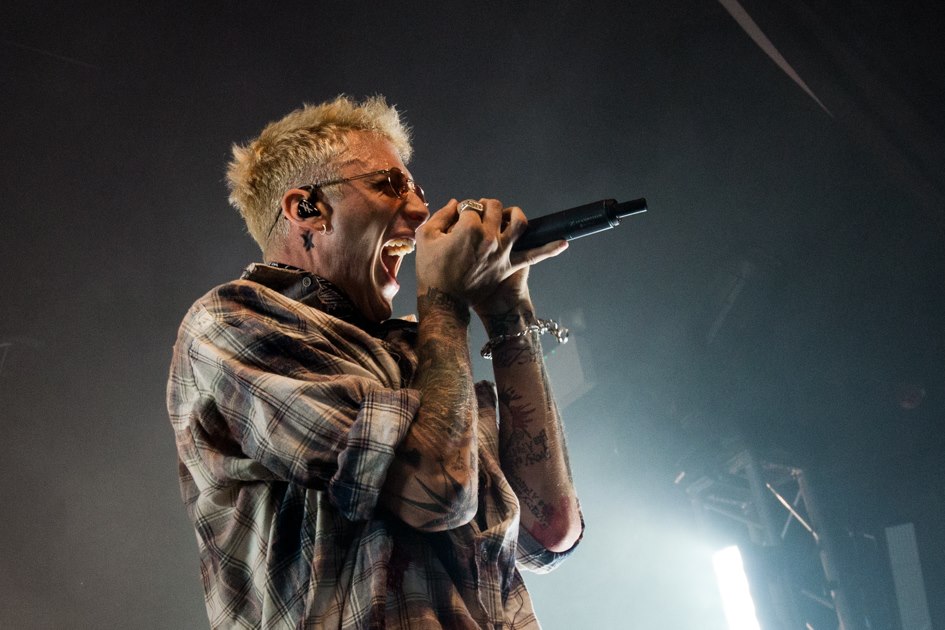 Off the back of his chart topping third studio album, Bloom, wild boy rapper Machine Gun Kelly hit the road on a world tour, bringing the madness to Newcastle’s O2 Academy for the first time.

MGK has earned himself a devoted fan base around the world by blurring the lines between rapper, rock star, and this year pop star; finding mainstream acclaim in the UK with his hit single ‘Bad Things’.

Newcastle was no doubt as devoted as any other city the Cleveland native visited on the ’27 Tour’, with fans dawning his signature ‘Est 19XX’ bandanas as far as the eye could see.

The show felt unlike that of your run of the mill rap gig, as a live band (with MGK also picking up a guitar from time to time) played throughout. Many may have come thinking the name ‘Machine Gun Kelly’ referred to the individual, but after leaving the Academy it was clear ‘Machine Gun Kelly’ is band; a band fronted not by a rapper, but by a multifaceted artist.

The set on the night perfectly showcased MGK’s evolution over the years, with the mosh pit inducing anthem ‘Wild Boy’ from debut 2012 album Lace Up, contrasting 2017’s lighters-up love song, ‘At My Best’.

Covers are unusual at a rap show, but this one felt special. MGK had the crowd spellbound with a touching cover of Linkin Park’s ‘Numb’, performed in tribute to the band’s late frontman, Chester Bennington.

Despite his new found mainstream appeal, Machine Gun Kelly hasn’t lost the grungy edge that won him his cult like following years prior. Chugging a bottle of red wine with a plaid flannel shirt hanging off his back, tattoos exposed, MGK is the embodiment of a modern rock star.