Hot off the back of his debut album El Classico, that features grime icons such as Skepta, Giggs and Ghetts, Fekky looks to be on track to be the next big thing out of the UK. RIDE caught up with the London rapper whilst he was paying a visit to the North East earlier this month – we chatted about the new album, the dark side of the rap game and Fekky’s dream collaboration. 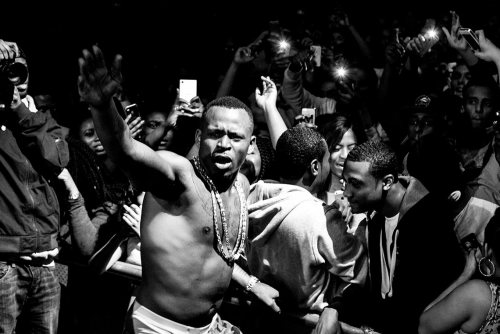 The name ‘El Classico’ – The Classic, you’ve tried to mix a classic old school sound with some modern in there too, but how did you get the balance right?

Basically, I listen to a lot of artists and I feel like they have just the one style, they’ve just worked out what they’re good at and stuck with it. Back in the day albums in general were a lot more varied, so I’ve put the effort in to making El Classico varied.

You’ve got tracks like “Real Ones” and “Broke N Famous” that are bringing that old school, New York type of feel, then you’ve got songs like “Avirex” that combine old and new. Obviously you’ve got your grime elements too, I went for an old school grime producer like Rapid, who use to do Tinchy and those guys years ago when grime was just coming through. So, I feel like that’s what I was aiming for when I was trying to make it a classic, just songs that a lot of people could listen to – like “My Size” as well, very different for Fekky but the girls love that track.

“I like to surround myself with friends that remind me where I come from and who I am, that’s why a lot of people around me are day-ones”

There are a lot of tracks on the album that delve a bit deeper into your past, talking about the trap lifestyle and being on the road, how important was it to you to keep it real on this album?

I feel at this point it was very important, because I’ve tried to kind of hide that sort of stuff before. If you listen to my older music, it’s very like have a good time, energetic, party sort of stuff. So, I didn’t really want to bring too much of my past into it, I thought lets just keep it as a good time. But, I feel like it got to a point where the fans wanted to know a bit more about Fekky, not just the guy that did “Sittin’ Here”, I wanted them to know a bit more about who I am as a person. I felt like with my debut album there’s no better time to let the fans delve into you a bit more.

On the album you also mention a lot about ‘fakes’ and ‘actors’ you come across in the rap game, how do you deal with people like that?

I’ve got immune to it, but I’ve seen a lot of people fall to it as well. Things like stress and depression are very high in the game these days. You come into the music game and you feel like you know everybody but you’ve got to remember that you don’t, you meet people along the way and not everyone you meet is going to be your people. It’s about being strong, If you’re a bit weak it can affect you, because you see people that are stealing style or stealing things that you’re doing and not giving you props, it can get to you. It’s not a game for the weak bro, trust me.

I like to surround myself with friends that remind me where I come from and who I am, that’s why a lot of people around me are day-ones. I’ve tried not to get myself lost with new friendships in the game. But, I have been lucky. If you’ve noticed since I came into the game, I’ve done tracks with Dizzee, Skepta, Giggs – I’ve had a lot of big co-signs in the game, I’ve been lucky that people have actually kept it almost as good as they can with me. Everything people say, you hear, everything people do, you know and you’ve got to surround yourself with people that won’t remind you of it. Like, my friends won’t be on their phones telling me ‘oh, this guy’s said this about you’ or whatever, that’s bad information and I don’t need to be hearing that. We keep it so that we’re always empowering, we’re having jokes, having fun and I feel like that’s the sort of energy you should surround yourself with.

“I would have wanted 50 Cent on the album, that’d be my dream feature!”

You’ve got a lot of big features on the album, like Skepta, Giggs, Section Boyz, is there anyone you wanted on the album that isn’t there?

I could have put some of the newer guys on, the likes of Mo Stack and J Hus. But, the album was made really organically. I’ve not been in the game as long as a lot of the other guys on the album, but I’ve came just before the newer generation of guys coming through, so those are the relations I built as I was coming up…but I would have wanted 50 Cent on there…that’d be my dream feature!

With these iconic artists wanting to work with you, does it feel like a validation of your work?

I guess so, I just feel  it shows that I’m earning it, because these are the people, especially Dizzee, that aren’t going to jump on the track with anyone. It shows I’m making the right moves, the right noise. It makes me feel like ‘Fekky, you’re progressing, just keep going.’

You’re latest single off the album, “My Size” featuring Shakka, did you always intend to make that the club banger style track?

Nah, not really. I never really aim my music, whenever I make songs I’m never like ‘that needs to be for radio’ or whatever.But, I do have a strong girl following and I don’t feel like I was really feeding them, I was giving them too much greeze.

I was in the studio with Giggs when the Shakka tune came about. Shakka popped into the studio and I showed him some beats, I played him the “My Size” one and he just put a hook down for it and it all just happened really naturally and organically. I remember, me and Giggs were talking about it and I was like ‘ah I feel like this is a bit poppy for Fekky’ and he was like ‘ahh nah, you go with what you feel man, you’ve caught a vibe, that’s how it should go.’ And he was right, don’t box yourself in, to be honest with you it’s one of the best wildcards I’ve ever done. It’s like anything with music, I feel like you should never be scared to try and you should never be scared to evolve as an artist.

I just want an even better year than 2017. I think there’s going to be a lot more music coming from me, a lot more sporadically as well. Making the album I felt I could only drop music going towards the album, so there was a lot of times where I was quiet and the music went to waste… maybe not to waste, it still came out, but on the album there’s 18 tracks and I made about 40. So, I feel like now I’ll be dropping tracks a lot more freely in the future.

CLICK HERE FOR A CHANCE TO WIN £500 COURTESY OF FEKKY