We caught up with Geordie comedian, rapper and drummer Jack Fox to find out his inspiration behind releasing a new EP per month in 2018… 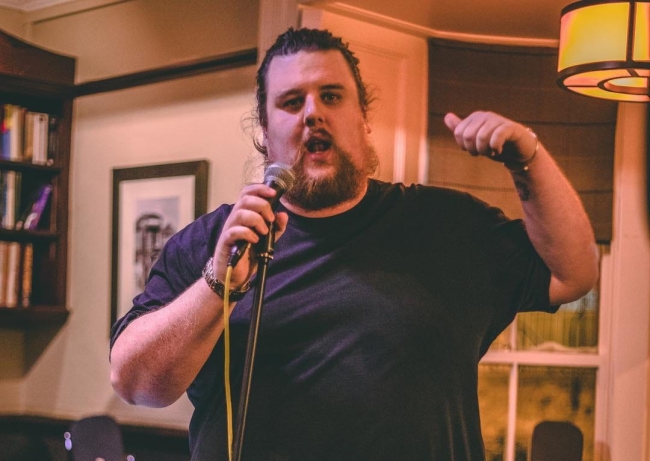 Jack, it’s fair to say you’re a multifaceted entertainer, when someone asks what you do for a living what do you say?

Exactly that! I tell them I’m an entertainer. Or sometimes just a musician as that’s how I started out.

We’ll start with the music; you’re currently on a mission to release an EP per month in 2018, how did that idea originally come about?

I was fortunate enough to get an audio interface (a piece of equipment that allows you to record directly onto your computer) for Christmas and as I was setting it up I kinda accidentally ended up recording a song. Then another. Then another. And then I thought I’d just put something out on New Year’s Day. Then I just kinda figured it’d be cool to do a little rap EP after that initial guitar based one. Then I thought I’d challenge myself to doing one a month, it’s good to challenge yourself creatively, it eliminates complacency and laziness. I get excited by the fact that I will be putting an EP out in May and I haven’t even thought about what style it’s going to be or how many songs will be on it yet!

You’ve recently released your 4th EP of 2018, so far they’ve each had different styles – was this planned from the start?

Not particularly. I tend to go through big mood swings and opinion changes. So one week I could really be into Led Zeppelin and be adamant that there’s no better group of artists to ever grace the planet, then the next week I could be big into Kendrick Lamar and feel there’s no better album to have ever been recorded than ‘To Pimp A Butterfly’. So, it’s really just what I’m feeling at that given moment in time.

How do you find the inspiration to make such a variety of music?

I’m inspired by the people around me. Like I mentioned before, setting myself a goal of an EP a month eliminated complacency, so if I see other artists from the region releasing music and making waves then it inspires me to do the same. On the other hand, I’m fortunate enough to be in a band with three very creative musicians, so when we get together it’s not difficult to find the inspiration to come up with drum parts!

You’re also a comedian, does your comedic side often spill over into your music?

Occasionally I’ll use some comedy chops and apply them to writing rap lyrics. It’s all about timing and finding the right punchline that hits the hardest, you know?

Do you think it’s harder to impress people with comedy or with music?

Music, definitely. Usually when people ask me this I ask them if they’d rather go to a comedy night to see 5-6 comedians do 10 minutes of jokes each, or a local music gig where they’d see 3-4 bands do 30 minutes of music each. Sure, you might not find some of the jokes funny but the chances are you’ll find the majority entertaining. With the live music gig, you might hate all 3 bands and have to sit through 30 minutes of each!

But still, nothing compares to seeing your favourite band live.

With so much on your plate in terms of your comedy, solo music and band commitments, how do you prioritise what to work on?

I fit what I can in wherever I can. The band comes first, we usually rehearse at least once a week and we talk daily in the group chat. I try to get at least one stand up gig a week too, but I wouldn’t let that get in the way of a rehearsal or a band gig. The solo stuff I fit in at night – I don’t sleep much!

Could you honestly say that you enjoy one side of being an entertainer more than the others?

I really can’t. Being a comedian and having a good gig is very satisfying because it’s all your own work, but on the flip side when you have a bad gig it’s also all on you! With the band, a good gig again is fantastic but if you have a bad gig at least you’re still playing music with people you love and respect. It’s the old cliché – the highs are high and the lows are low. I love all aspects of what I do and wouldn’t change any of them – well, maybe just my bank account!