You probably haven’t heard of Newcastle based Hip-hop collective 3MONUXRECORDS, but after releasing the first two tracks from their forthcoming debut EP only two months ago they’ve already managed to amass over 50,000 streams on Spotify – now you know.

The core of the collective currently consists of three young rappers, Otis Rey, Rackko and AfterParty – with various photographers, videographers and producers also helping to tie the 3MONUXRECORDS package together. Their debut AURA EP is due to drop this summer, as well as accompanying visuals and live shows.

We sat down with Otis and Rackko to chat about the upcoming EP, their unprecedented Spotify traction and ambitions to bring more North East artists into the collective.

RIDE Music: When did the three of you meet?

Otis Rey: I’d say we all met about 2016. AfterParty, the guy that’s not here, I met him first year of uni at one of these halls parties. It was a Hip-hop/Grime night and we ended up freestyling one after another and it went from there.

RIDE: When did you decide you were going to take the music serious as a collective?

Otis: We’ve all kind of done it on our own little music things before, so I started writing stuff when I was like 11, like R&B stuff, then at uni I started making music with someone else but that fell through. So, after the three of us met, we’d all get together and freestyle for fun, then one day I just invited them round and said let’s do it, let’s take it seriously. We started trying to learn fruity loops, which felt like the hardest thing, but we’ve came on so far since then. I’d say we’re more like individual artists, but right now it’s a collaborative project because that’s how it naturally started.

RIDE: Who are your main musical influences?

Otis: I’d say mine are A$AP [Rocky], I like the way he picks out flows; Ty Dolla $ign, I try to imagine the stuff he’s doing and challenge myself to do similar. Old school people as well, like complete old school, like Otis Redding – he’s who I take my name from. I’d say, Sam Cooke and Ben King too. Rapper wise, for flow, I’d say someone like Chipmunk, because I admire the way he can pick pockets, like you can virtually put him on any beat and he’ll pick a pocket you didn’t know existed. So many others as well but they’re like the core ones.

RIDE: You’ve got your debut EP, AURA, coming out very soon, with two songs already out on Spotify, tell us more about it.

Otis: The name AURA just links to the vibe; we didn’t want it to be mega serious, like I’m not Eminem, so I couldn’t just put out a fully lyrical album. We’ve got to get their attention musically first. We didn’t want it to be too serious, but we didn’t want it to be too lazy. The songs that are already on Spotify, we wrote those about 10 months ago. “Pass Me By” I wrote on the way up to a cousin’s wedding, just on the train bored – I came up with it in like an hour. I held off from showing people at first because I didn’t think they’d feel the beat, but when I eventually showed everyone they were like ‘bro, why didn’t you show us this earlier?’.

“Hennessy”, that one’s a bit different. It took a lot of time, because I wanted to make a hook that was catchy – so if you played it in the club people would vibe along to it, but if you listen to the verses it’s not like I’m just speaking gibberish. Then we’ve got another 4/5 tracks to go along with those included in the full AURA EP that’ll be out this summer. 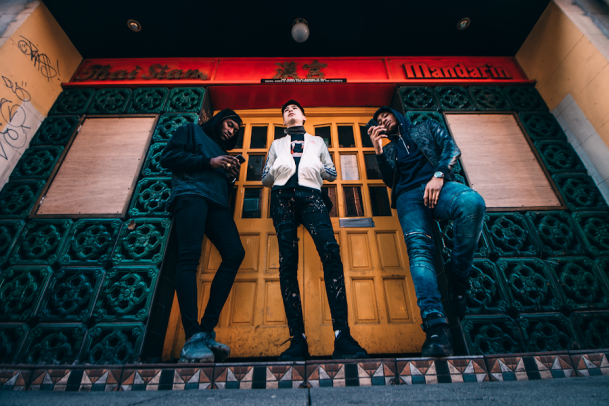 RIDE: Without any real push those two tracks are doing really well on Spotify, where did the traction come from?

Otis: It sounds crazy, but we want to be competing with the best. So, we said if that’s what we’re trying to do then everything has to be on par – audio has to be on the same level as the visuals, and the way we package it all has to be on the same level, because we’ve got to be professional – at the end of the day, it sounds crazy, but you’re fighting against the people that are in the charts, for someone else to lend you their ear for three minutes. So, I’ve gotta give someone a reason to listen to my track for three minutes, over someone like TY Dolla $ign. We’re fortunate enough to have a guy, Vincent, he’s like our creative director – the guy doing all of the stills, all of the editing, he’s like a finesse god! We just did a video out in Barcelona with him and he’s amazing. We’re fortunate enough to have him to give us that sort of package in terms of how it looks. It’s all important, if it looks scrappy then someone might not even click on the song. The traction on the tracks, I don’t know where that’s come from, I keep looking at it like a kid on Christmas Day.

RIDE: Do you think each of you have different qualities that makes your music stand out?

Otis: I think for AfterParty and myself, we’re both from London, so it’s kind of bringing a London twist, because the stuff we’re doing wouldn’t necessarily be considered ‘UK’ music – I don’t feel – the stuff that’s coming out of UK scene right now is a kind of poppy Grime or just Grime, then UK rap’s a bit different, but I think that we’re putting a UK twist on American stuff. That’s where we bring our influence. Then he [Rackko] brings something totally different, his flow is mad – especially his lyrics, it’s a totally different flavour and I think you can hear the Singapore sound in his rapping, but it’s just like a totally different perspective.

In terms of beats we’ve got a few guys we use in the US, one from New York and one from Illinois. We started off using Cash Money AP’s beats, but we felt they were making us do things, they sort of controlled us to bring out a certain type of vibe – like an Lil Uzi type vibe. He’s good just not for us. But we’re happy with the guys we’re working with now.

RIDE: Artists wise it’s the three of you right now, is that something you’re looking to expand into a label?

Otis: 100%, so at the moment we’ve got a couple people that we’re working with, Reali-T, Raza, we’ve worked with a couple more of the Sunderland guys but they were on their on NNE stuff at the time – if they don’t come over we could definitely collab with them. But, 100% it’s looking to expand on artists, because there’s a lot of talented artists in the North East. Going back to that point made about us looking professionally packaged, I think a lot of artists around here might not necessarily have that same idea; there’s some proper talented people, like Kay [Greyson], she’s super talented. She’s one of those people that is actually packaged well, but there are other people that are like her that may not be packaged well, and because of that they fall victim to just not getting seen properly. Some of the people, like the 46 boys, a lot of them are good, I’m not trying to knock anyone, they’re my boys, but sometimes if they were packaged better they could be much further than where they are now. 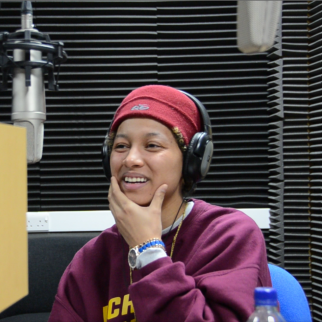 RIDE: So, some of these people you’d be looking to bring into the collective?

Otis: Yeah, 100%. Put it this way, if things did take off in the way we want them to, 100% we’d be looking to build on the relationships we’ve had with people we’ve messed around with before. The fact that we know that these guys are talented, if I’m trying to make a song I’m thinking I’ll go with one of these guys rather than someone more established. I prefer to make music with people that you’re familiar with anyway because they know you.

RIDE: Do these artists you’d like to work more with know you admire them?

Otis: The ones I’ve worked with personally, so Reali-T knows he’s super talented, he doesn’t need anyone to tell him that. Raza’s mad talented as well, I remember being in his studio once and Reali-T was in there half an hour, Raza was in there like 50 seconds, laid out a whole verse, perfect one take, one breath – and I was like ‘ok, I’m next, oh shit’. Those guys know they’re super talented. I haven’t specifically told anyone like ‘yeah you’re mad’, but you kinda know when you’re in a circle with someone that rates your music. Some of the other guys know I rate their music, people like Dredz, but other people I haven’t been in the environment with them that I could get to that conversation. I only work with people I feel can achieve a certain level, the same level that we want to achieve.