Arguably one of the most underrated hip-hop artists of the new generation, Florida’s Denzel Curry pulled out all the stops on his visit to Manchester; tearing down the Academy 2 with an action-packed set.

Maryland native IDK got the show off to an inspired start, providing the key that let the ravenous Manchester crowd loose. “Do not close that pit until I count to three, do not close it!” IDK exclaimed, orchestrating the carnage. IDK made crowd interaction a focal point in his set, regularly kneeling down to have genuine conversations with the front row. However, what really stood out was IDK’s ability to ramp up the tempo with a mosh-inducing banger, before conjuring an ‘old-school’ head bopping atmosphere by cutting the beat and showcasing his lyrical ability acapella. Much like Denzel, IDK is an anomaly in the modern hip-hop landscape; he can appeal to both old school and new school sensibilities with his music – there’s hype tactics, but there’s rapping ability in equal measure.

After opening with the melancholic ambience of “TABOO”, the title track from his latest album, it quickly became clear that Denzel had engineered this set much like the album; starting with slower tempo, melodic tracks, before switching things up a gear every so often, building up to an explosive finish. Pulling two of the best cuts from his last two studio albums out of the bag, “SUMO”, from ‘TABOO’, crashing into the lyrical pledge of allegiance that is “ULT”, from ‘Imperial’, the energy was rising up. Denzel mirrored the frenzied physicality of the crowd; as he jumped, kicked and pirouetted his way across the stage like a pissed off acrobat.

As a long time friend of the late XXXTENTACION, it was no surprise when Denzel called on the crowd to put their Xs in the air in tribute to the fallen Flordia rapper. Denzel then proceeded to incite a riot in the Academy with two of X’s hardest and most popular tracks; “I’m Sippin’ Tea in Yo Hood” and “Look At Me!”. This riotous atmosphere set Denzel up perfectly for a transition into “Ultimate” – his much meme’d breakout track that grabbed the world’s attention back in 2015, due to the incredible rhyme scheme, wordplay and machine gun pace. 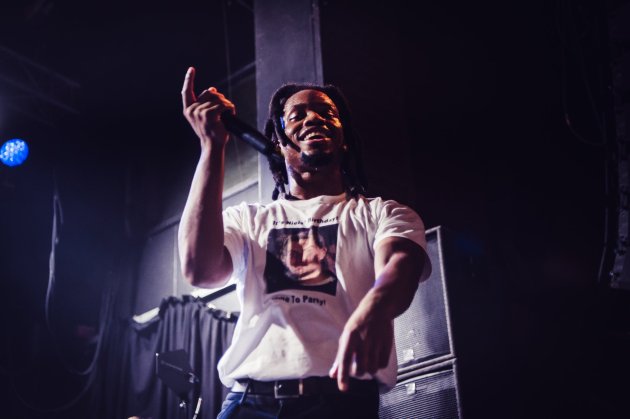 After the blow-out adrenaline rush of “Ultimate”, it was hard to see how Denzel could top that with whatever he had in mind for the encore. So, Denzel roped in a couple of friends to help him out. Manchester’s new favourite rapper IDK came back to kick things off with “No Wave”, before tagging out for a special appearance from ZillaKami of City Morgue, (who had just finished a show at another venue only minutes before) for “VENGEANCE”. Zill, who had already acquired a leg injury from his own show, and Denzel gave it all; screaming their lungs out on the hardest cut from ‘TABOO’. Denzel then launched himself into the crowd, before making it back on stage for the strangely soulful final section of “VENGEANCE” – bringing Manchester Academy smoothy back to reality, after the elation of experiencing the most visceral live hip-hop act around right now.

Photography by: The Manc Photographer