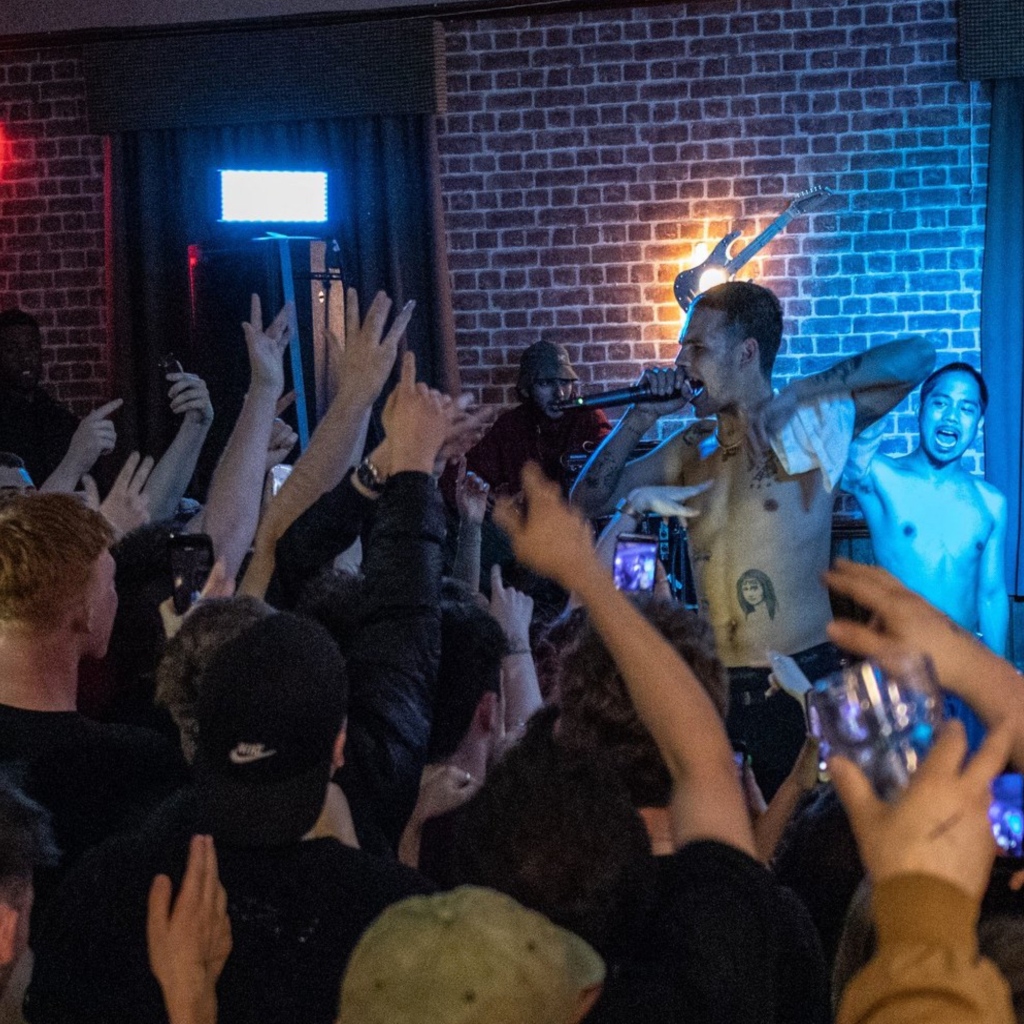 What can you get for 99p nowadays? 1/3 of a coffee? Not even a 99 ice cream cone? The best gig of your life? Slowthai‘s final ’99p tour’ stop brought him to a little pub nestled in an industrial part of South Shields (a coastal town about 15 minutes outside of Newcastle), and for just 99p the Northampton native gave me one of the best gig experiences of my life.

In the last few years, Slowthai has been making a name for himself as one of the most forward-thinking UK rappers in the scene right now, thanks to tracks like “t n biscuits” and “Doorman” that fuse elements of grime, hip-hop and punk with gritty beats and politically charged lyrics. His debut album ‘Nothing Great About Britain’ has just dropped, boasting collabs with grime icon Skepta and two stellar singles: “Gorgeous” and title track “Nothing Great About Britain”. So, the fact I had the opportunity to see him in a 150 capacity pub for 99p before he inevitably blows up felt surreal.

A balaclava-clad DJ took to the humble Trimmer’s Arms stage prepping for Slowthai’s grand entrance… through the front door. With no back entrance or backstage area, Thai made his way to the stage through the sold-out crowd, grinning cheek to cheek under his hood as bouncers escorted him through the wall of arms reaching to pat him on the back. After his boxer’s entrance, Thai jumped straight into his rip-roaring set, sending the crowd into a frenzy that would last all night. 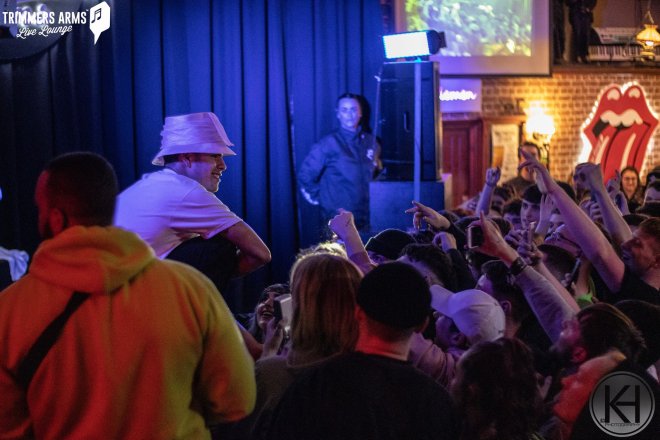 Inexplicably wearing a hat your posh aunty would wear at Royal Ascot, stolen from the crowd, Thai was embracing the intimacy of the venue, dishing out more handshakes than the queen to the front row. “We’re not here to shake hands, we’re here to have a fucking good time aren’t we?” Thai laughed, before mounting one of the amps, orchestrating the madness perched over the rowdy crowd. Throwing caution to the wind, Thai dived into the crowd head first, somehow making it back to the stage in one piece – I, on the other hand, ended up on my arse.

One of his heavier cuts, “GTFOMF” saw Thai crouch down to eye-level, back on his amp, screaming the hook “GET THE FUCK OUT MY FACE” quite literally in people’s faces. Very much living in the moment, seemingly aware of everything going on around him, Thai would demand everyone’s attention before telling the crowd to form a pit. “Don’t look at the stage, this moment is for you, it’s not about me, lose yourselves in the music,” Thai said before giving the crowd a taste of his massive Skepta collab “Inglorious”.

“I need you to go fucking crazy for this one,” Thai said before diving into pacey mosh anthem “Doorman”. It’s fair to say Thai got more than he bargained for, the venue had about five security scatted around the venue… not enough to prevent a full stage invasion. Thai’s amp fast became an island he was stranded on among the sea of crashing bodies. Looking a little nervous that things were getting out of control, Thai threw up an X with his arms, usually signalling to event staff that things have gone to shit basically. This was no use, the small security team seemed to have given up, leaving it to Thai’s muscular balaclava wearing DJ to get the stage back under control. Thankfully, he managed to get things back to normal after the track, meaning Thai could finish his set pretending he wasn’t shitting himself a little bit during that whole situation…

“I honestly want to thank everyone that’s came out, that’s bought that album, that’s supported me in all this shit. We wouldn’t be anywhere without you.” Thai told the knackered, but very much adoring crowd. This was genuinely one of the greatest gig experiences of my life, never have I been somewhere so intimate where the artist actually embraces that intimacy. Thai made you feel part of something, part of his story. Much like his music, nothing about this gig was conventional, was ‘normal’, and that’s what was fucking great about it. The days of nodding your head and looking angry at rap shows are dead. Good riddance.

Thai casually sauntered out to the smoking area for a cig about 10 minutes after his set was over, humble as fuck and happy to take photos with anyone who wanted them, doing his best to look as mad as possible for each snap. In a cringe-worthy moment, I told Thai his show was the best I’d ever been to, he laughed nervously with his toothy grin before thanking me…