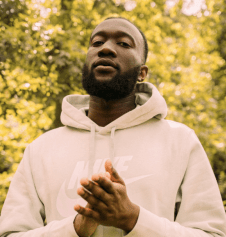 Sick of throwaway rap tracks that you lose interest within a week? Don’t worry, we’ve got your back. South London’s Vintage has dropped a new track that’ll soon be a constant in your playlists. Relax, travel back to a simpler time and find love with Best Friend.

Vintage is all about creating music with meaning and putting an emphasis on story telling in his tracks. Best Friend follows the story of your everyday guy just trying trying to get the girl, with slick visuals that transition from the gloomy modern day to colourful 90’s vibes.

Really it’s like two tracks in one. Starting with chill romantic rap vibes and going on to pure R&B bliss, Vintage flexes all of his talent behind the mic on this one. It’s super creative and a mega refreshing listen in an era where violent rap seems to be the most popular.

Best Friend is going straight into your date night playlist – it’s slick, it’s fun and it’s such an easy listen. Vintage’s beyond-the-boundaries approach to making music sets him apart in a crowded-genre, entering himself as a must-watch artist and the player that the UK music scene has been crying out for.

If you’re looking for some super chilled RnB meets hip-hop vibes that sound like they’re straight from 1990, then Best Friend by Vintage is an absolute must listen!